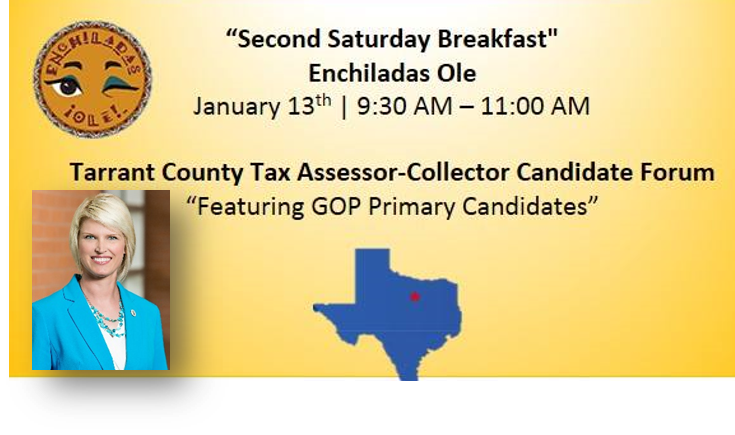 Howdy, everybody! My name is Trasa Robertson Cobern, and I'm running to be your next Tarrant County Tax Assessor-Collector.  I would like you all just to call me Trasa, because this is a very informal situation, and I'm actually a member of Fort Worth Republican Women.  I've been a member for over a year.

I want to talk to you about why you should choose me to be your Tax Assessor, and then I want to take some questions, because I want to hear from you.  A lot of the job is communication, hearing from the taxpayers, listening to them, and I absolutely would be doing that.

I think that almost every citizen in Tarrant County can agree that Ron Wright has done a great job as Tax Assessor, and that's for several reasons.  One, he's given great customer service.  He's really gotten people to the front to be able to represent the Tax Office well and answer questions and be able to help people.  Second, he's done a great job administering the office; he's been a great voice for the taxpayer; and he's done all that with a smile…and a bowtie.

While Ron has years of private sector experience, his recent experience has been in public service.  The Commissioners trusted him to appoint him to the position, and then he earned the trust of the taxpayers to elect him to that position.  That's for a couple of reasons – Ron has impeccable ethics, and he was able to earn trust through his actions as Tax Assessor.

This job is about trust.  It's about integrity.  And it's about character.  There are 4 billion dollars that run through this office each year, that's billion – with a “B” – and the Tax Assessor is personally responsible for each and every dollar that goes through the Tax Office.  That's a lot of responsibility.  That's a pretty heavy burden.  And so we have to make sure that we really implicitly trust the person that we choose for this position.

And that's one of the reasons why I chose to run.  I know that you can trust me for this position.  In my conversations with Ron Wright, Ron agreed with me; he actually told me something similar to what he told Wendy, which was that I had the qualifications for this job, that I could do a good job as Tax Assessor.

I'm an open book.  You can Google me.  You know my family, if there was dirt to be had, it would be on the Internet.

You can ask all of my friends, you can ask my family, you can ask people who've worked with me and people who've volunteered with me, and I would say ask my enemies.  But honestly, there aren't a lot of people who actually know me who are in that category.  And everybody you ask will tell you one thing – I am who I say I am, and I do what I say I'll do.

I'll be that person, and I'll do it with a smile…but I won't have the bowtie.