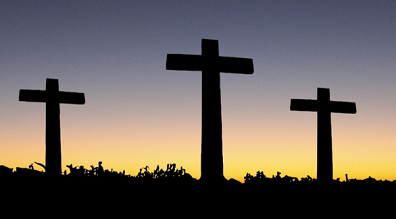 Today is Good Friday.  As my students noted, it is a “good Friday, because there's no school.” In today's world, that's often how this special day gets treated.  It's actually listed as a bad weather make-up day in my district, so if we'd had snow or ice, we wouldn't be out of school.

However, the capitalization of the word good is not accidental.  It is a deeply good day, and one that often gets overlooked in the celebration of Easter, which is a mistake.  The miracle of Easter in the empty tomb cannot happen without the events of Good Friday.

Jesus was taken by the soldiers of the Sanhedrin, the ruling body of the Jews, on the night of Passover, a Thursday.  He had already instituted the Lord's Supper and signifying what He was about to do.  He then took his disciples to pray in the Garden of Gethsemane, and was captured by his own beloved Judas, who betrayed him.  He was taken to the Sanhedrin where the chief priests and the elders tried to solicit false testimony against Jesus, and finally found witnesses who testified that he had said he would “destroy the temple of God and build it again in three days” (Matthew 25:61).  They didn't understand what he was talking about, and accused him of blasphemy.  Based on this and their fear of his secular and popular power, they turned him over to the Roman governor, Pontius Pilate, on Friday morning.

Jesus was sorely treated that day.  He was beaten, he had a crown of thorns stamped hard onto his scalp until blood poured down his face, and he had to carry his own cross across the town to the Place of Skulls, Golgotha.

The books of Matthew, Mark and Luke all tell us the hour of Jesus' death.  It happened at the ninth hour of the ancient clock, which in our time-telling is 3 p.m.  The accounts vary slightly, but all record the same event happening: at his death, Jesus cried out in a loud voice, begging to know why his father had abandoned him (Matthew 27:46; Mark 15:34).  Desolation came to Jesus then, like it never had before as He took on the responsibility for all of mankind's sin.  The Apostle John records that Jesus said “It is finished”, but in the original text the Greek word used was “tetelistia” which was an accounting term for “paid in full” meaning Jesus had paid for our sins in full.  He gave up his spirit at that moment, and immediately the veil of the Temple of Jerusalem was torn in two from top to bottom.

The tearing of the veil in the Temple was a notable event, far more so for the Jews of the time than the fact that three petty criminals had been sentenced to death on wooden crosses on a nearby hill.  The veil separated the regular part of the Temple from the Holy of Holies, which was where God dwelt when his Spirit descended on the Temple.  It was where the Ark of the Covenant rested.  Only the High Priest was allowed in that space.  A torn veil allowed all those present in the Temple to see into the Holy of Holies.  All could now see God.  It was a sign, for those who were paying attention of what Jesus had accomplished for us all.

And today, for those who are paying attention, Good Friday should stand as our reminder.  Easter is a beautiful day, a day to rejoice that Jesus is back with us and death is defeated.  But Good Friday exists because it was necessary.  There would be no resurrection without complete surrender to the will of God.  There would be no resurrection without the willingness of Jesus to face the absolute human moment of separation from God, when he assumed all the sins of the world.

It's always been historically interesting to me that anyone would be blamed for Jesus' death.  Jesus stated that no man could take his life, but that he laid it down willingly for all of us (John 10:18).  It is our collective sin, our collective human guilt, which he took away that day.  It's why a day of death and sorrow is known as and is good.  On that day, all our tiny and small and medium and large and super-sized sins all came down on the shoulders of Jesus, and he took them ON PURPOSE and headed off into the land of death.  He came to set us free, and on the anniversary of the day when he did, we should celebrate.  We should remember, that it's not on Easter that our sins were taken away, but three days before.  Good Friday is a deeply good day, and one that should not be overlooked.