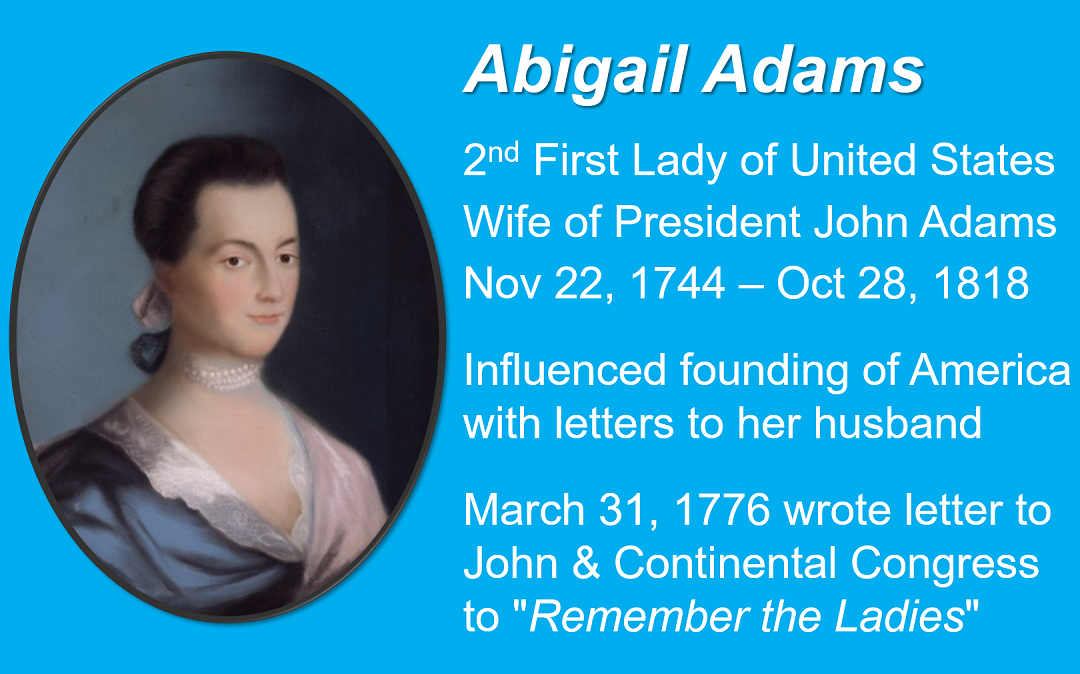 “I long to hear that you have declared an independency — and by the way in the new Code of Laws which I suppose it will be necessary for you to make I desire you would Remember the Ladies, and be more generous and favourable to them than your ancestors.  Do not put such unlimited power into the hands of the Husbands.  Remember all Men would be tyrants if they could.  If perticuliar care and attention is not paid to the Laidies we are determined to foment a Rebelion, and will not hold ourselves bound by any Laws in which we have no voice, or Representation.”

Abigail Adams wrote this to her husband John, the future second President of the United States, on March 31, 1776, while he served away from his family for the needs of the Thirteen Colonies.  A few months later, those Colonies would declare the independence Abigail so wanted to hear.

It's interesting, as we finish March, which is Women's History Month, that Abigail Adams was arguing for the rights of women two hundred and forty-two years ago.  She knew that they would need a new “Code of Laws”, the Constitution, and was asking her beloved husband for consideration in that set of rules for the new society they hoped to form.  Little did she know that the “rebellion” she spoke of being fomented by women would not happen for well over a hundred years, until the suffrage movement really got traction during the Progressive Era and resulted in the federal right to vote for women in 1920.  Even the Adams' home state of Massachusetts didn't grant suffrage to women until forced to by the 19th Amendment to the Constitution.

John had his chance, as he helped write the Declaration of Independence in June of 1776 before its adoption on July 4th.  He could have influenced Thomas Jefferson to write “all people” instead of “all men are created equal”…although, at the time, the word men was considered universal for all, so perhaps they meant to include women as well.  Nothing comes up in the debates that indicates that, however; generally white males just focused on white males at the time.

Unfortunately, John did not have a lot to do with the writing of the Constitution, as he was stationed in London as the first Ambassador to the mother country after the breakup.  Imagine the awkwardness.  He was kept very busy dealing with the bruised egos of the British king and court, and had little time to control what James Madison and co. were doing back in Philadelphia in 1787.

So Abigail is denied her protection for the fairer sex, and it sets up the rather dramatic fashion that women finally obtain their right to vote after World War I.

Would it have been better or easier if John Adams had campaigned for women based on his beloved wife, much as he followed her advice in so many other subjects?  Would it have changed all of American history, lessening issues like slavery and child labor or increasing reforms?  Perhaps, but we'll never know.  History is as it exists, not as we would dream it.  That's a lesson many people today need to remember.